All We Are Saying (Artists for Peace) presents Mapping Armageddon

'Mapping Armageddon' ran from 25 November 2016 - 20 January 2017 in Sunderland. Barrie West and Stephanie Smith, plus the help of 19 poets, collaborated in a monumental exploration of man’s inhumanity towards man and the lessons which must be learnt.

West constructed a four wall installation which traced global conflict from WW1 to the present day.
Smith, by contrast, provided ‘The Poet’s Chair’ which was at once sculpture and pulpit, a unique performance space that demands we learn the lessons so many men and women died to teach us.

To open the biennial year of All We Are Saying, we produced an art exhibition of two large installations jointly called “Mapping Armageddon”.

Installation One: The Darkening Room by Barrie West 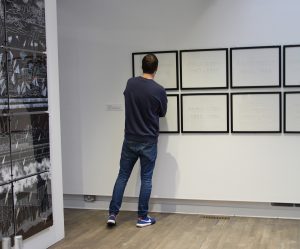 Non-combatants are less likely to have a memorial raised in their honour than those who died in conflict. In most wars they are included in the reckoning as “collateral damage”. This was a memorial to those whose lives were sacrificed as a result of their non-combatant stance. The design is based on a columbarium. 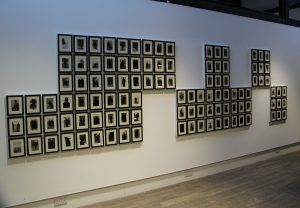 No matter what the circumstances, it’s the empty space that hurts the most. The place at the table, the shared view from a park bench, the unused car in a drive, so many reminders and so much emptiness.

Visitors were encouraged to write on slips of paper which they then force into the joints of a wall. The final dimensions of the wall were the same as the execution wall at Auschwitz. The intention was to “bring down” the wall with all the slips of paper.

“The uncomfortable truth about ‘Dark Mirror’ is the closer you inspect the details, the more likely you are to see your own reflection.” 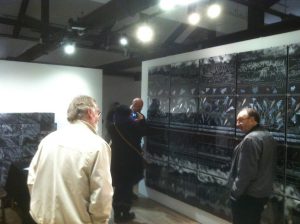 HG Wells famously wrote a book about the necessity of war to clear the way for peace. His quote “A war to end wars” was soon adopted and then cherished as supreme irony as the century gradually revealed itself. 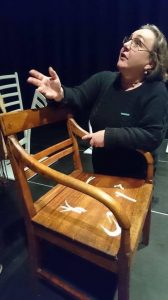 An installation which explores the themes of lives lived and lost through war and focused on what remains when hostilities have ended. 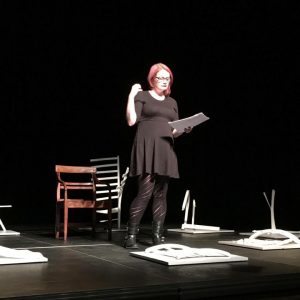 The central chair is the “record holder” containing stories of domesticity, and works as a receptacle of knowledge and wisdom for future generations. 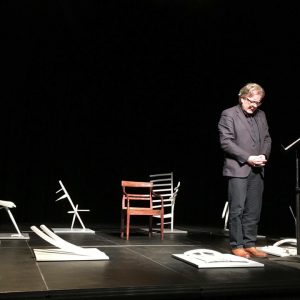 The surrounding forms and figures are made from the detritus of destroyed homes; domestic wreckage barely recognizable as chairs where only fragments remain. 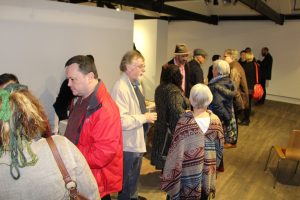