Ha’way Sunderland 2021! It’s 5 days since we heard Sunderland had made it through to the final round of the UK City of Culture competition and everyone at the Sunderland 2021 office is still grinning from ear to ear.

There has been an overwhelming amount of joy and goodwill at the announcement. I’m not over exaggerating when I say there has been thousands of messages, emails, Facebook comments and Tweets in support of the campaign. When the news broke on Friday night, we genuinely couldn’t keep on top of all the positive messages that were coming through on social media. Here are just a few: 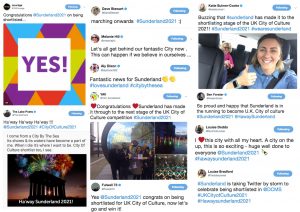 The celebrations continued into Saturday afternoon at Summer Streets festival where BBC’s Jeff Brown opened the festival with the shortlisting announcement. It was a wonderful day where the community came together to celebrate the amazing music being made in our region. It was a great teaser of the kind of events the city could expect more regularly if we should win the UK City of Culture 2021 title.

After doing some insights, it looks like #Sunderland2021 had over 1.3 million impressions across social media throughout the weekend. We want to thank everyone who lent their support and contributed to this mass movement. This is a real testament to the passion of the people of the North East and a display of how much everybody wants this project to succeed.

We can’t underestimate the magnitude of this achievement for the city. For the judges to shortlist Sunderland is a major endorsement of the vision and ambition in the city right now. Now that we’ve had that vote of confidence from the judging panel, it really is anybody’s game – and we are in it to win it.

We received the details from the DCMS on Monday morning about the second round. The remaining 5 cities will be required to submit a more detailed bid on September 29th at 12noon. A judging panel is expected to visit the city at some point in October. As well as this, the bid team will also present to a panel in Hull with the winner decided and announced in Hull in early December.

Over the next few months, we will work to further convince the judges that Sunderland needs the title and has the capacity to deliver a year of world-class culture. But above all, we will need to convince them that we really want this title more than any of our competitors, and that we are a proud and passionate place. Given the reaction to the shortlisting news, this won’t be difficult at all.

Please continue to support the bid in these final stages. Encourage all of your friends and family to like, follow and engage our social media pages. I know it may sound silly, but those social media numbers really make a huge difference. 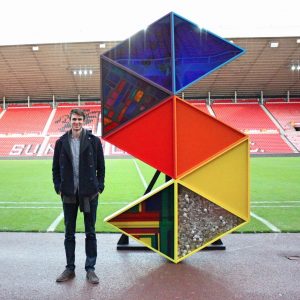