Sunderland upbeat despite missing out

Sunderland’s cultural leaders vowed to push ahead with a programme of ‘major cultural activities’ after it was announced today the city had missed out on the UK City of Culture title.

Arts and Culture Minister John Glen revealed Coventry as the winner of the title live on BBC One’s The One Show.

“We developed an exciting and compelling bid, shaped by hours of feedback from people from the city and beyond and we want to reassure people that all that hard work and valuable contributions will be used to shape our cultural future.

“Our bid really got to grips with what Sunderland is about now, and what people want it to be in the future. It was packed with ideas, thoroughly deserved to be on the shortlist and there is a huge amount of support and momentum to make many of them happen despite not winning the title.

She added: “We’d like to thank all of the people and businesses that have lent support throughout the process. It’s been really overwhelming to see so many people get behind the city and we thank them wholeheartedly. We still believe that this is the start of something special for Sunderland.

“Our warmest congratulations go to Coventry – and commiserations to Stoke-on-Trent, Paisley and Swansea. It’s a brave thing to throw your hat in the ring and I am proud that Sunderland was among those that did.”

Keith Merrin, Chief Executive of Sunderland Culture, and part of the bidding team, said: “This is certainly not the end. Over the coming months, we will be making announcements about some of the great things that will come out of our bid and we are determined that we will carry on with the fantastic work we have started and support the cultural renaissance we are seeing in this wonderful city.

“There will be a lasting legacy from the bidding process. Sunderland Culture, formed by the partners responsible for mounting the city’s 2021 bid, to manage Sunderland’s cultural venues and programme, has already successfully raised more than £3.5m that will be pumped into developing Sunderland’s cultural scene.”

Coun Harry Trueman, Deputy Leader of Sunderland City Council, pointed out how other North East cities who have been unsuccessful in the competition in the past, had attracted huge investment regardless, and were able to introduce large-scale events and arts programmes into their cultural calendar.

He said: “Look at Durham, which was unsuccessful in its bid in 2013. Despite this, Lumiere was born out of the competition, an event that delivers a £9.6million boost for the city every two years and has cemented Durham’s place as a cultural tourist destination.

“Our other near neighbours NewcastleGateshead were also unsuccessful in their quest to win European Capital of Culture in 2008, and they’ve gone on to deliver huge cultural programmes since, next year hosting the Great Exhibition of the North.

“We were always very clear that this bid, win or lose, would deliver a lasting legacy for Sunderland. And it will – it has already brought increased investment and a higher profile to the city.”

Chair of Sunderland 2021’s steering board, and Pro Vice Chancellor at the University of Sunderland, Prof Graeme Thompson reiterated the team’s thanks to all of those who have backed the bid.

He said: “Being shortlisted for UK City of Culture is the beginning of something transformational for Sunderland. It has been really heartening to receive such widespread support and encouragement for our bid from right across the region. There is positive momentum behind culture in Sunderland now, locally, regionally and nationally – and a real desire to see the city’s cultural scene grow and develop. That’s what we will look to do, continue to effect change using the incredible insight we have gained and the networks and leadership established over the course of the last year or so.”

This year, Hull is celebrating being the UK’s City of Culture, and will pass on the mantle to Coventry later this month. 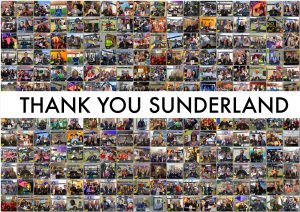